Central Taxis were delighted to attend The Society of the Golden Keys of Great Britain and the Commonwealth AGM at Blythswood Square Hotel last night for the presentation of a cheque for £8000 to Central’s Charity Partner the Edinburgh Children’s Hospital Charity.

A massive thanks again to everyone who attended the St Andrews Ball in November and helped raise money for such a great cause.

The ECHC are using the funds to buy an Oor Wullie statue as part of the upcoming national Oor Wullie’s BIG Bucket Trail. 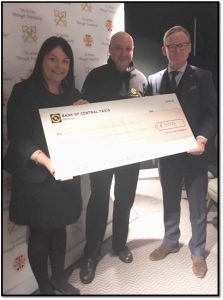 This ‘Wullie’ will be designed in the inimitable style of Edinburgh fundraising legend Tom Gilzean, tartan breeks and all, and subsequently be auctioned off to raise even more money. It will also provide a lasting Thank You to Tom for his remarkable fundraising over the years for good causes, including the ECHC and Edinburgh’s annual Kiddies Taxi Outing.

For more information on the Oor Wullie Big Bucket Trail and how to get involved visit www.oorwullie.com.

We use cookies to ensure that we give you the best experience on our website. If you continue to use this site we will assume that you are happy with it.OkRead more